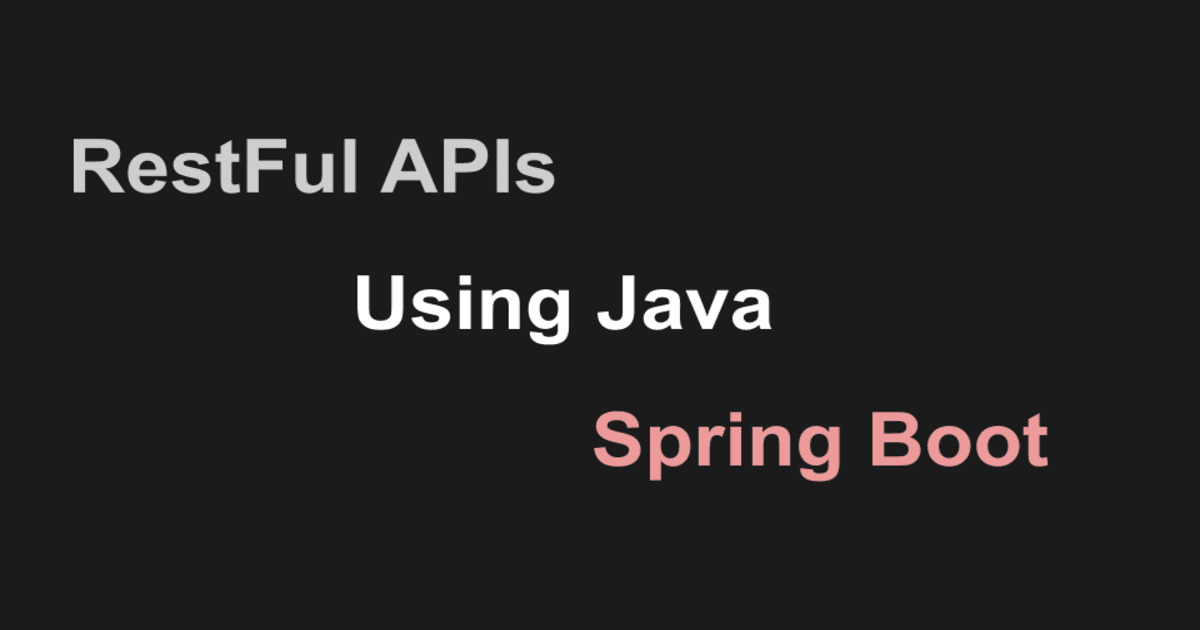 Java is one of the most widely used programming languages in the world. Not only it is widely used, but it is also being used as the core part of the top software companies in the world. So, if your dream is to work for those top companies, you better know a little bit of Java. This tutorial will help you to create a CRUD(Create, Retrieve, Update and Delete) based application. In this tutorial, we will create every API for a school management system.

1. Outcome and Goals
2. Why Spring Boot?
3. Why not use Spring directly?
4. Let’s start
5. Setting up pom.xml
6. Setting up the entry point of the spring boot project.
7. Let’s add a controller
8. Return Data from the Controller
9. Let’s think about data
10. Let’s add a persistence layer: Database
11. Setting up MySQL
12. Build the school Model.
13. Let’s make the Db Access layer (Repository)

After going through this guide, you will be able to build complex applications using Spring Boot framework. I would encourage you guys to create a small project of your own as well, as we move forward in this guide. During the course of the article this GitHub Repo will contain the code related to the changes being made.

While building a web application, the main goal of the developer is to get the application out as quickly as possible. The developer should not be worried about the configuring various layers of the system. Spring Boot helps us to remove that hassle and helps us to build us stand-alone, production-ready applications that Just works. With that definition, you might be feeling that this framework is just for small level applications. But that is not true. You can build fairly complex systems using this framework.

Why not use Spring directly?

There are a lot of reasons why people started moving on from the Spring framework to the smaller level frameworks. One of them which makes the most sense is the complexity. As Spring itself is a huge framework, its not always easy to get started and build the application. You need to know a lot of things before you can start building the application. Spring framework was originated to solve the commonly occurring problems in the Companies and providing a single framework that can solve them all. But as time went by, building a simple CRUD based application become pretty hard in the case of Spring framework and Spring Boot came to the rescue.

What do we need?

1. Text Editor (IntelliJ Idea: Community Version) Most of the Java developers make use of the official IDE provided by the IntelliJ community for carrying out the development work of there project. We are going to use this as well. 2. Maven Maven is used for handling the packages required to run the application and other basic requirements to make it work. This helps us to handle all the dependencies easily. Without Maven, you will have to download each and every dependency and download all the jar files and handle the full cycle of updates which itself is a quite hectic process. Maven does it by introducing an XML file that contains the name and version of the package that you need for the development of the given project. This file is known as pom.xml. 3. Java 8 or Above I will be working on Java 8 in this tutorial. You will also have to JAVA_HOME environment variable as well. Try running these two commands to find if you are set up properly or not. It should give you output like as follows: For setting JAVA_HOME, try this: Result for MAC will be,

Open up your IDE and create a Maven project with basic defaults selected. Choose some random GroupId and Artifact ID. 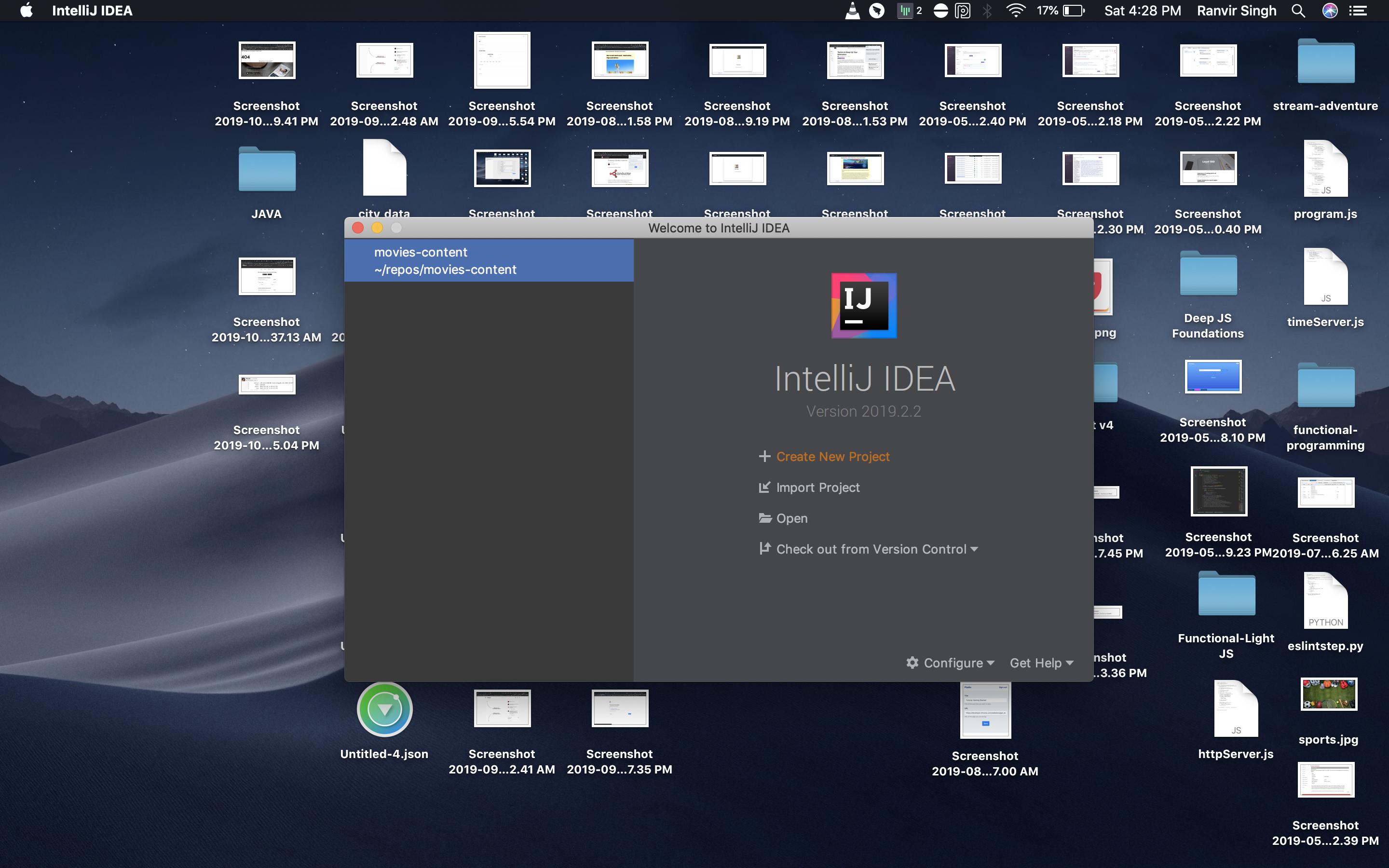 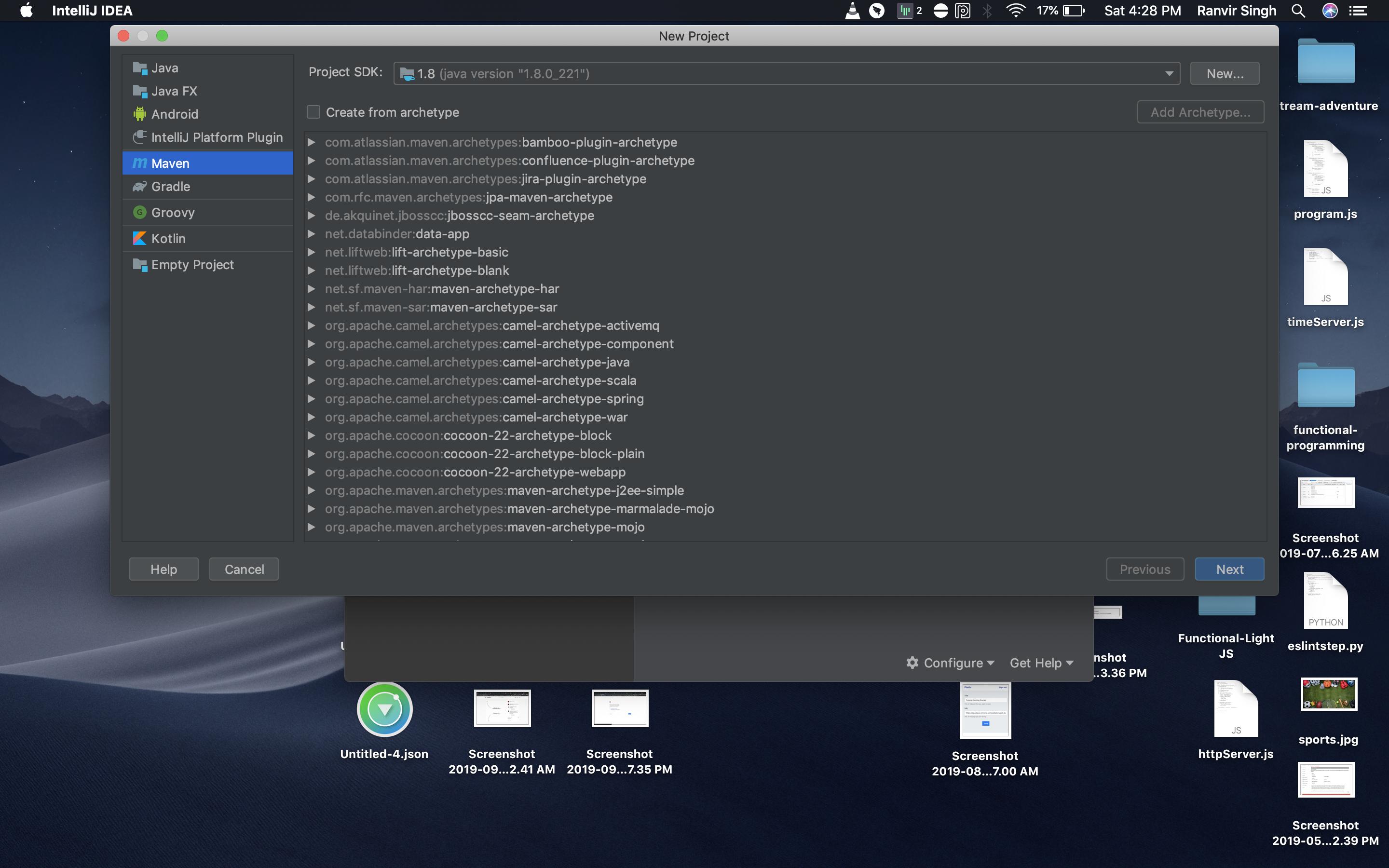 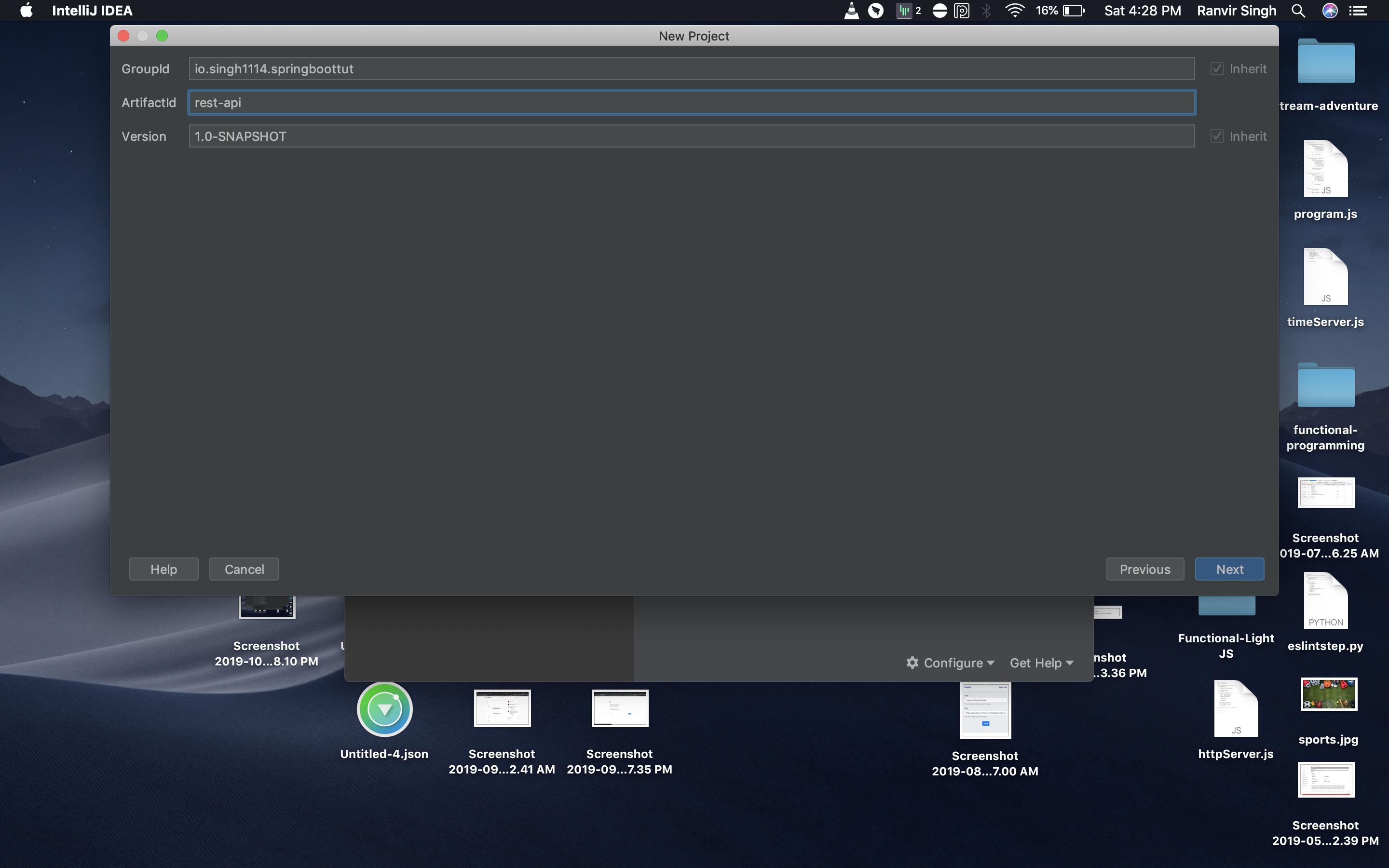 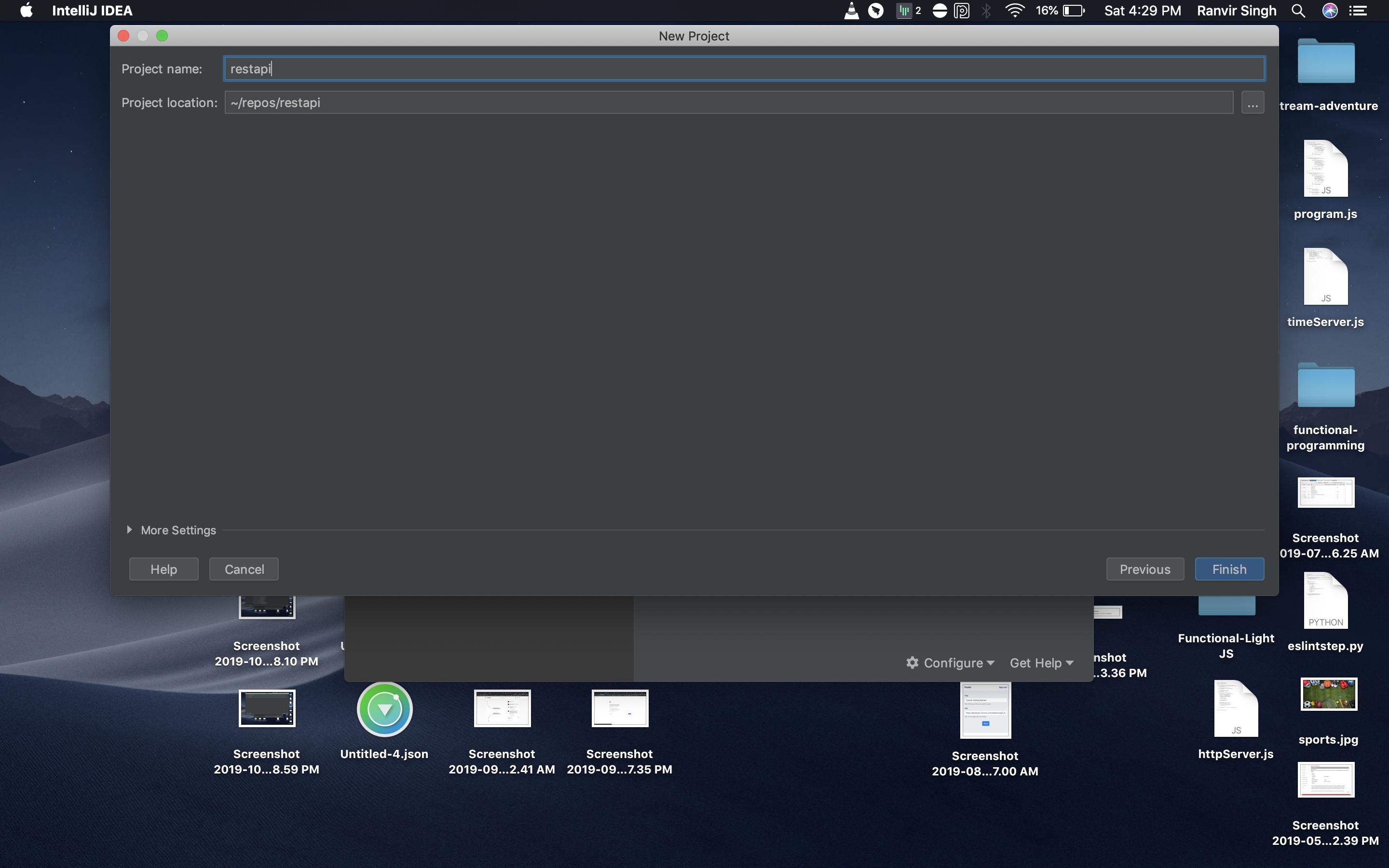 Find the pom.xml file and add the following configuration. The parent part in the file tells that we are going to use given parent and include all the jars that are present in the given group and given version. After adding this data to your pom.xml file you will have to update the Maven. In most of the cases, you will see a notification in the IDE itself to update it. Otherwise, you can find it in the IDE’s navbar.

Setting up the entry point of the spring boot project.

Now that our dependencies are sorted, let’s start by building the entry point to the project. To set up the entry point, create a package in the directory src/main/java with whatever name. In the package create a Java class with a name of your choice. First line contains the name of the package that you created. In the 6th line, you are letting the Spring Boot framework know that this entry point of the project by annotating the class which contains the main class. For starting the server you have to call a server starting function with the following line. SpringApplication.run(RestAPI.class, args); This is all that was required to build the initial server in Spring Boot. You can click on the Run button. This will run the application. You will see the following output. 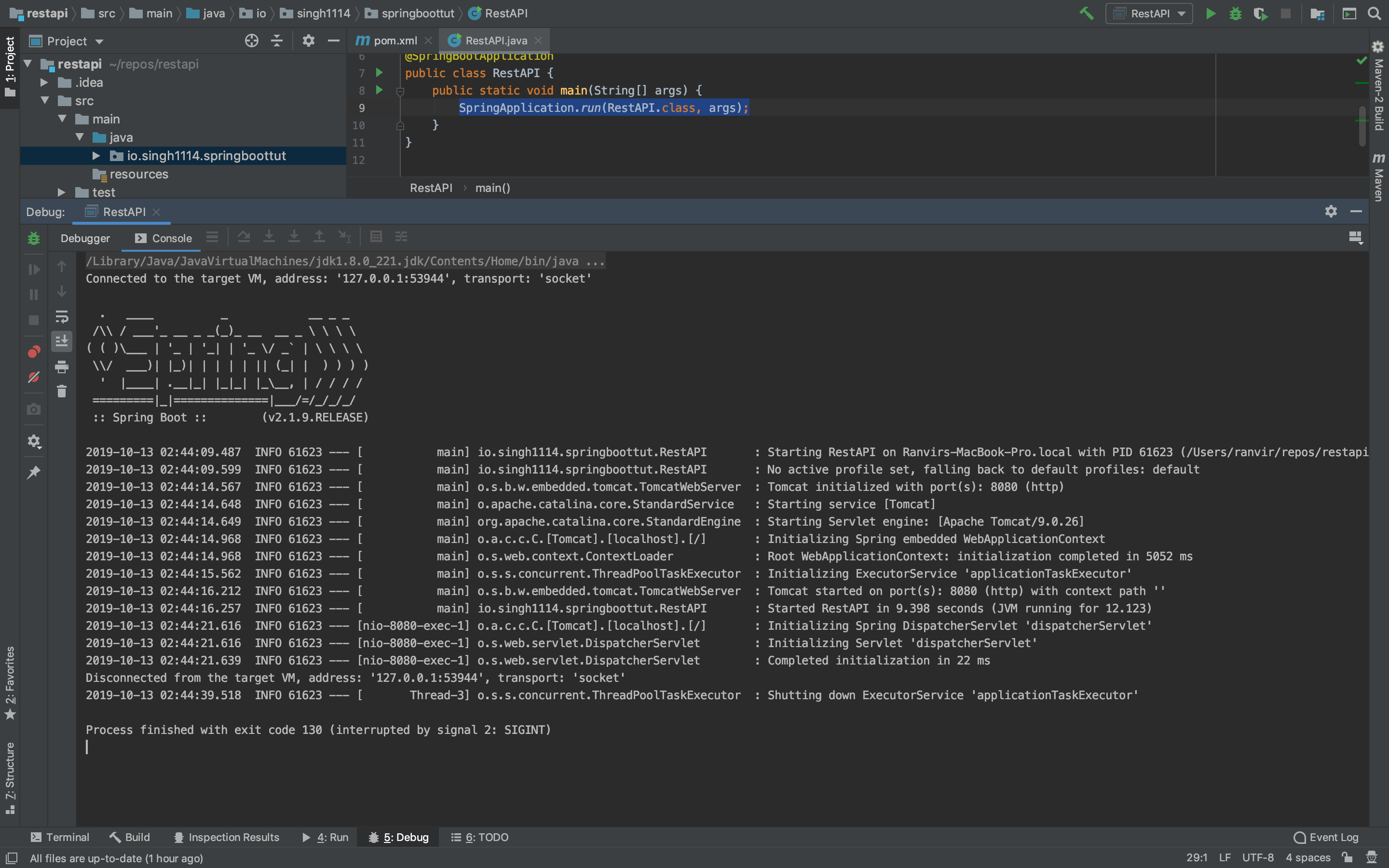 Now that the server is started, you can head out to the browser and type in http://localhost:8080 to find the server. You will get the following error message. 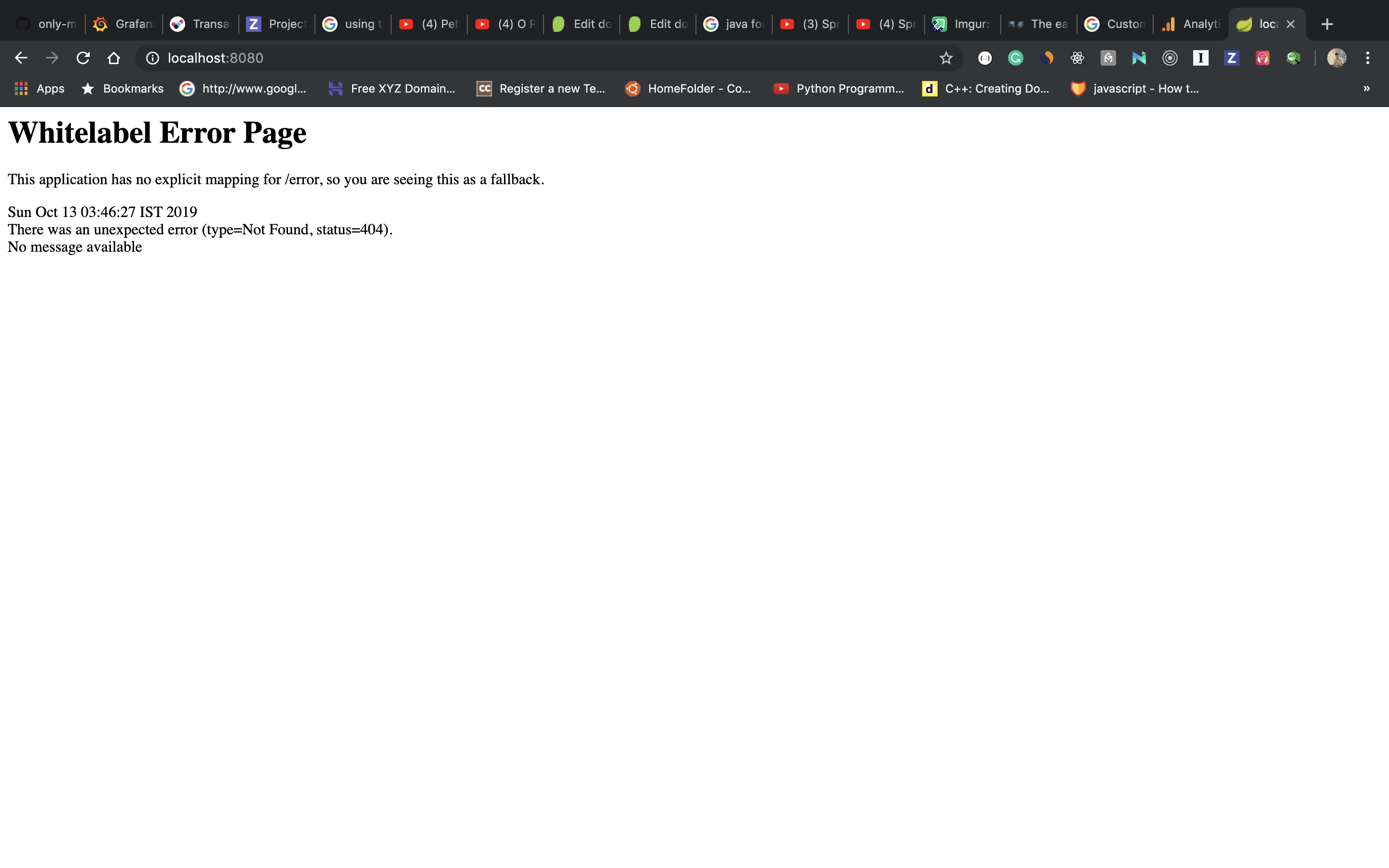 That was really easy. It’s really easy to setup a server using the Spring Boot framework. Now we will work to create Controllers and various other things to create a proper set of Rest APIs.

Now that we have a simple server set up, let’s move forward and create a valid URL that we can hit and get the response back. For the testing purpose, I am going to create the status API. This API will tell us whether the services of the server are up or not. For this purpose, you will need to have a class annotated with RestController. For more information, you can learn more about the MVC framework. Spring Boot allows us to simply create controllers where we can specify which URL is going to be used to run this particular code. Create a file called StatusController.java in io.singh1114.springboottut.status package and add the following code. RestController is the part of the code that tells the Spring Boot that this class should be treated as a controller. Once we have this, we can use the methods which can be used by any controller and written in RestController static class. RequestMapping takes two arguments, where you have to specify path and API Method( GET, POST, PUT). But if you don’t specify anything, it takes GET by default. Rerun the application and head to http://localhost:8080/status/. You will get the We are up! message.

Return Data from the Controller

Now, let’s try to pass back data from the Controller. We are going to start with a basic StandardController.java and Standard.java class in the io.singh1114.springboottut.standard package. In the Standard.java file, we are defining the schema of the standard class along with the getter, setter and constructor functions. These functions will help us to set and get the data for various class variables. In the StandardController.java file, we are using the same method that we used last time to create an API that allows the GET method with /standards endpoint. This time the function is returning back the List data to the endpoint. Spring Boot helps us convert the data in the List to valid JSON and sends back the data. Here is how it is going to look on the browser. 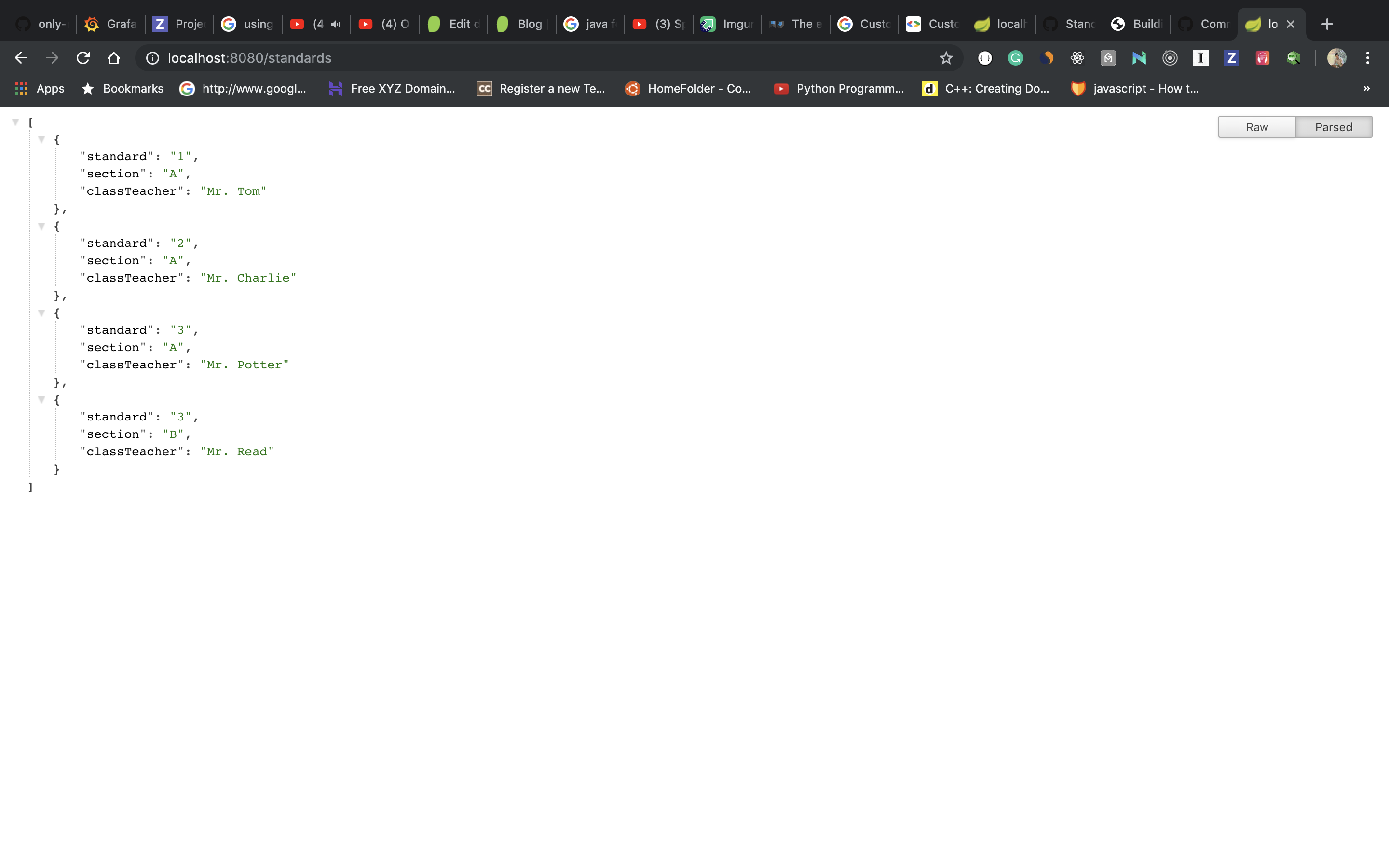 Now that we have agreed upon the basics of the APIs that we are going to develop, let’s just add a persistent layer that can persist data. There is a name for adding this persistence layer to the Java, called Java Persistence Layer( JPA). JPA is a type of ORM( Operation Relational Manager). If you have worked on some other framework, you might have heard about this term. An ORM helps us to reduce our effort by providing build-in methods to query data from the database. We are going to use MySQL for the tutorial purpose. You can go forward and choose any of the databases out there. The only thing that you will have to change is the libraries that you are importing, everything else should stay as it is.

For Linux, you can try this command. Note: The first line tells the URL at which Spring could find the database connection. Second-line gives the username of MySQL who is the owner of the database. The third line is the password of the database. The fourth line is the setting that will help you to auto-generate the tables in the database. We will have add MySQL and Hibernate dependecies so that they can take care of handing the persistence layer for us. Add the following code to pom.xml, Just try to build the application once done with the setting. It should build without any error.

Here is what io.singh1114.springboottut.school/School.java file looks like. After writing this down, run the application and check the MySQL shell to find the table created. 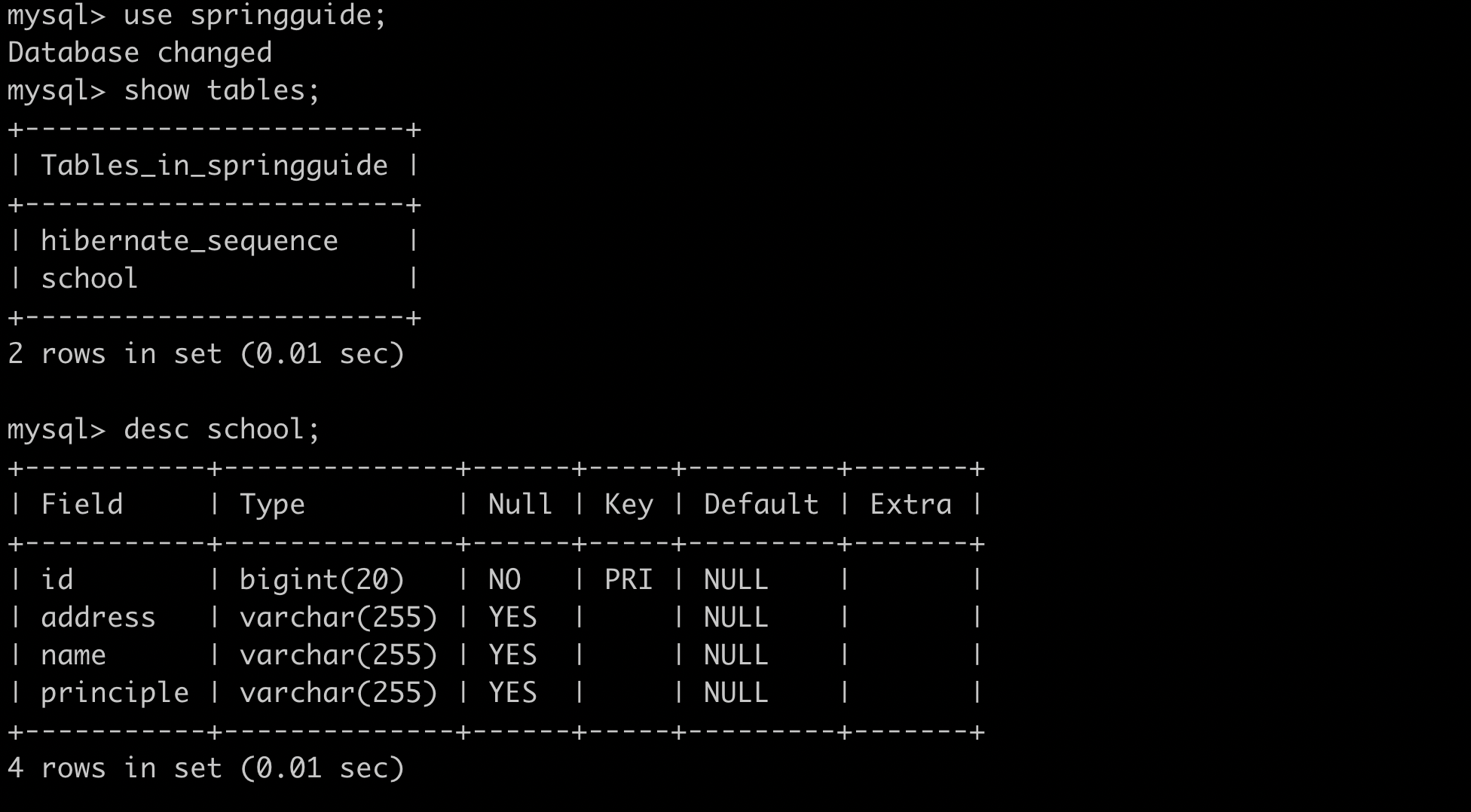 Note: Sometime main Java package doesn’t contain javax.persistence depending on the version of Java that you are using. In that case, you will get an error, java: package javax.persistence does not exist. All you have to do in that case is add another dependency for, javax.persistence Read this Stack Overflow answer for more details. Entity is the keyword that tells the Spring Boot that the following class should be considered as a table class. Class parameters are fields of the table. With these lines, we are letting the Spring Boot know that the field which is annotated with Id keyword, will be treated as Primary key. GeneratedValue(strategy = GenerationType.AUTO) tells Spring Boot to autogenerate the value of id field( By incrementing the field)and Column field specifies the column name. These are required only if we are doing something else than the normal stuff.

The database Access layer in Java is given the name of the Repository. A simple repository provides all the basic methods required to find, create and delete entries in the database. Add this code to io.singh1114.springtut.school/SchoolRepository.java Basically you have to extend the CrudRepository and create an interface of that. In the params, you have to pass the name of the Java class that you want to extend and type of the primary key being passed (<School, Long>). We can create another file to handle interactions with the DataBase by creating a Service layer. In Java, it is generally done to separate the business logic from Controllers. The advantage of using such a service is that Java while building will load all the classes marked as business services as a Singleton and it will not have to create an object again and again. We can do that by using the @Service annotation. Here is the content of io.singh1114.springboottut.School/SchoolService.java and corresponding Controller code. Looks like we have already discussed most of the stuff in here. Please drop your comments if you are stuck somewhere. Now you are ready to run your application with DataBase connected. 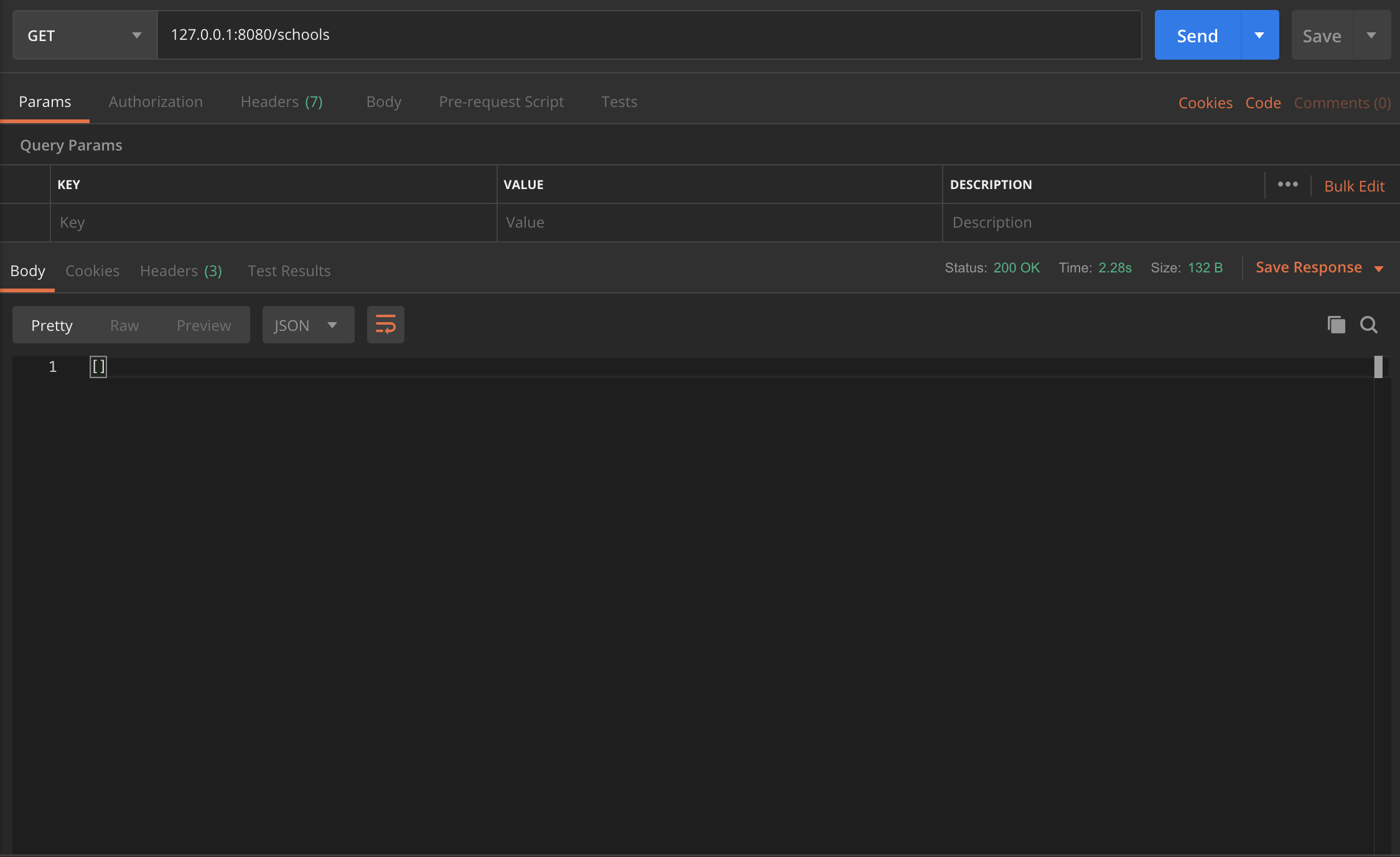 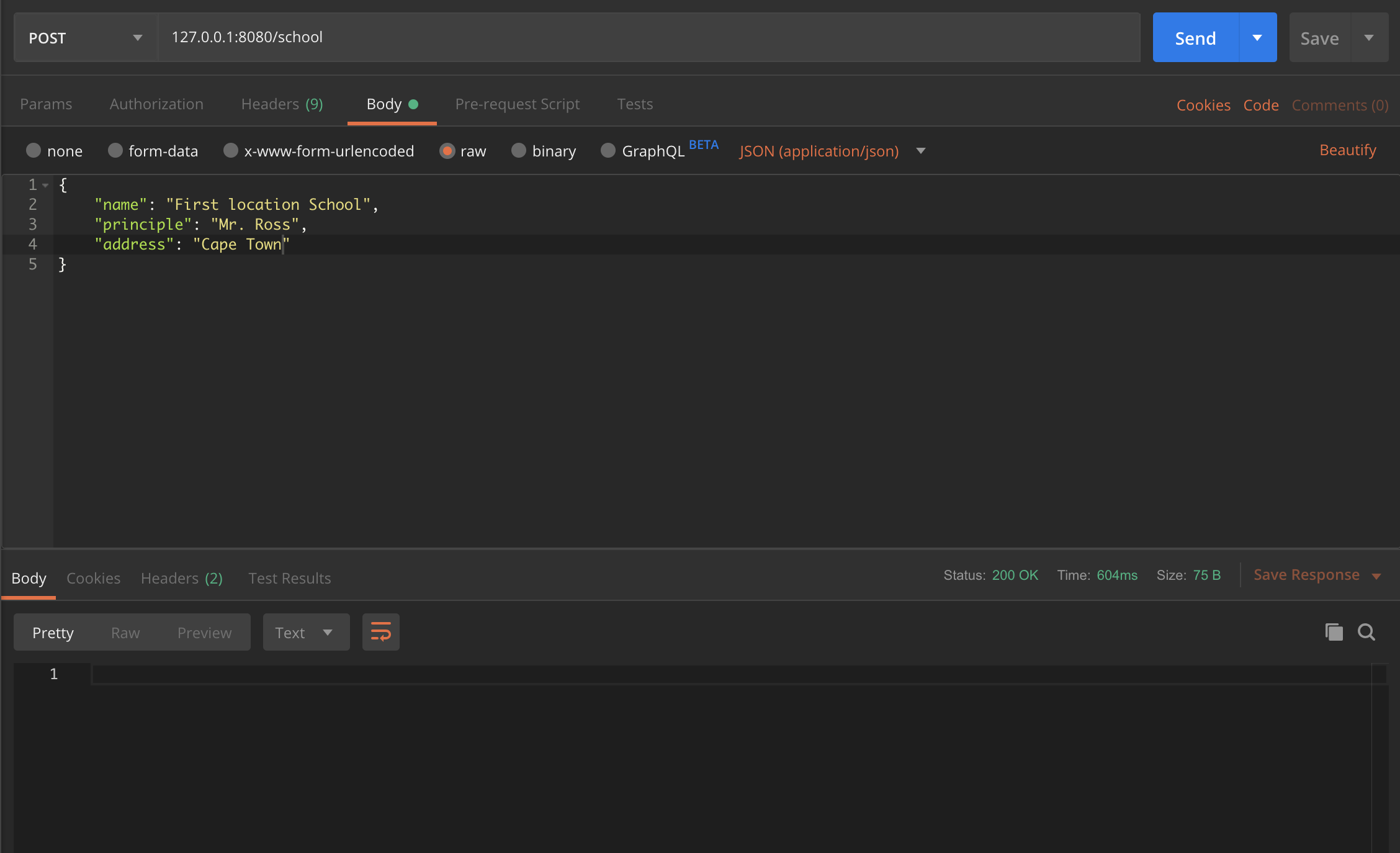 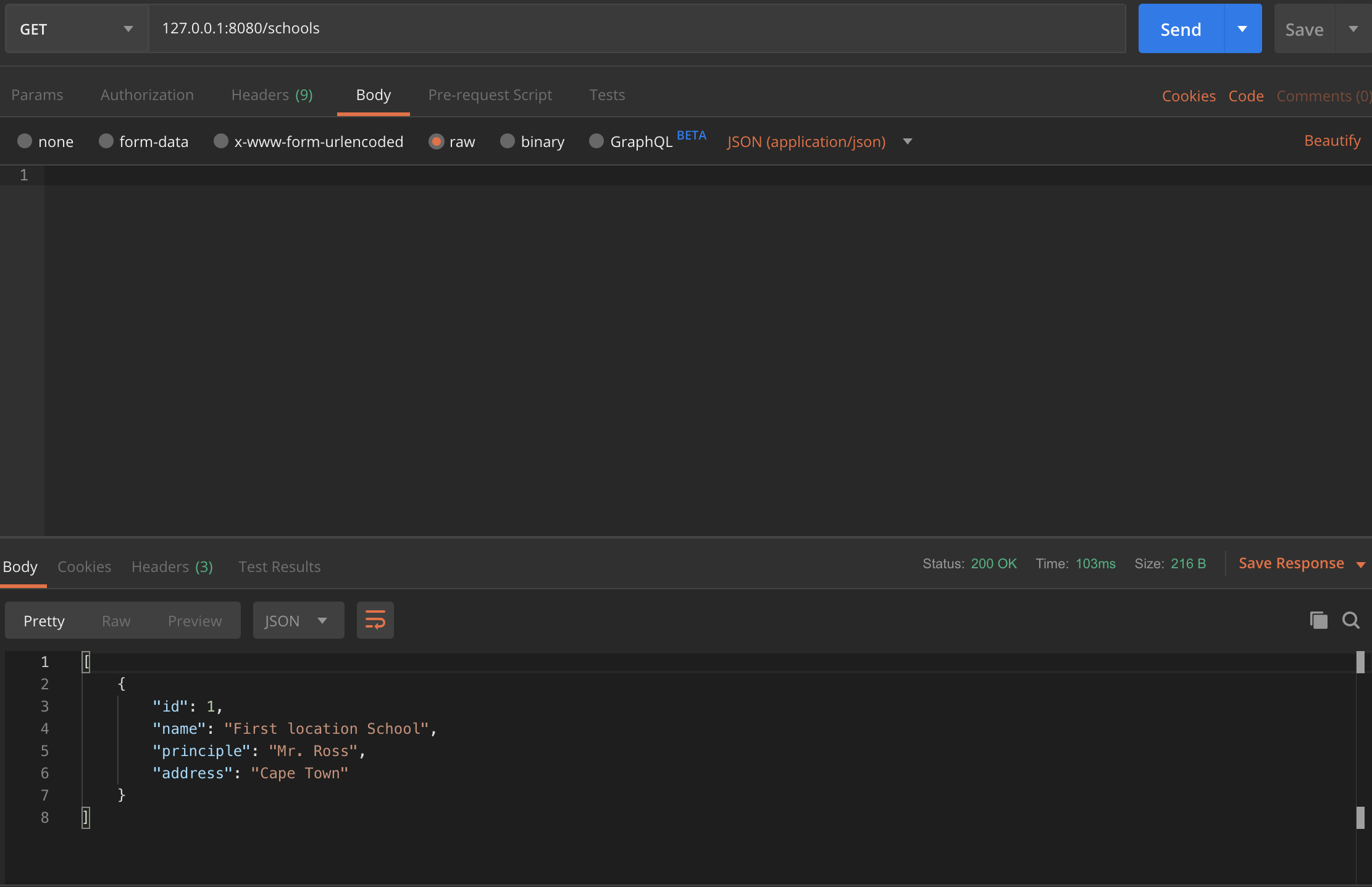 That’s all for this part of the guide. With this much knowledge of Spring Boot, you can create any level of complex project( With a bit of googling). Read the following post, if you need to know more on how to test your newly developed APIs.


Your reviews are very important. Please leave your reviews in comments section below. You are awesome.

2. Integration testing of APIs in Spring-Boot( Java) with Junit | For Beginners