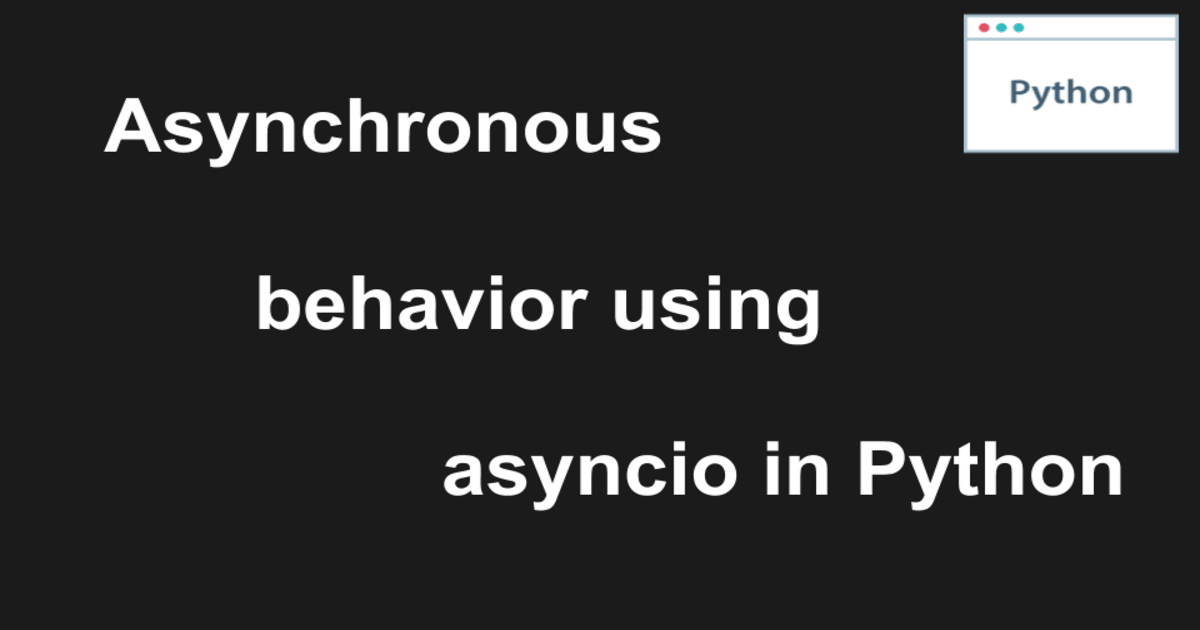 A lot has changed since I last published my post on handling long-running async tasks in Python using celery. Last time we used it to run a few async tasks to fetch data from some service which took around 1-5 minutes. You can read more about it in the post below.

Although I will still use celery for these types of long-running tasks, there is a subset of tasks that are better handled inside the execution thread itself. Today we will discuss a way of handling such operations.
1. Prerequisite
2. Basic async function in Python
3. Time taken for the full execution
4. Order of execution for async functions
5. Practical Usage
6. How does it work under the hood?
7. Handling timeout in async functions
8. Conclusion

To the people who know me, I switched to a new role which allowed me to write Node.js over a year ago and I have been working on it since then. During my time working and building APIs using it, I have started falling for the way in which Node handles Async behavior and long-running tasks.


The idea is simple, if the task is waiting for some IO, we can run some other task in the mean-time. Only the part that needs it, will wait for it. I wanted to use the same concept in Python. Fortunately, in Python version 3.4, they have introduced asyncio for the same purpose. In this post, we are going to talk a little about it and try to understand its importance. By the end of the post, you will be able to understand the importance of async functions and will be able to start using them into your codebase.

I am using Python 3.8 for this tutorial and you might want to use the same to run and try out the examples. You can try them online as well.

This is how we write a basic async function in Python. Response You have to start by importing the asyncio module. Async functions are defined just like a normal function, you just have to add the keyword, async. If you want to wait for the execution of some coroutine, you have to use the keyword, await. Finally, you can run the function using asyncio.run method.

Anytime you use the await keyword inside the async function, the thread will not move forward until we get a response from the called function.

This simple implementation will not help you understand the advantage of using async functions. In the next section, we will talk about the time taken for the execution and there you will really start to see the difference.

Time taken for the full execution

To understand the benefits of using async functions, we will compare the time taken to run the same code in async and sync behavior. Let’s first write the async code. I have defined 4 different functions doing almost the same thing. Let’s assume there is a long-running function called async_sleep which is doing some IO operation. For example: Fetching data from the database.

asyncio.gather() is used to run the tasks passed to it concurrently.

The response after running this code is as follows. The function completes the execution somewhere between 1-2 seconds for every execution. (Ran it 5 times to check). Now let’s try to run the sync version of the same code. The response that we got after executing this was: This saved us ~3 seconds for executing 4 functions. Now if we wanted to run 10000 such functions, we would save ourselves ~2000 seconds/ i.e. 35-40 minutes. That’s awesome, right. Even if we are just running 2-3 such functions in each iteration these small savings can be very important to provide better user experience to your customers. Now that we have understood the advantage of using async functions, we must know a few more things about it.

Order of execution for async functions

We should understand that while running the functions in async mode, we don’t really know about the order in which functions are executed. Let’s understand the concept with an example. The functions will return as soon as the execution is completed. We can mock the different execution time by sleeping for a random time between 0 and 1 using, random.randint(0, 10) * 0.1. Here is the full code. The response to the following code is,

After the release of Python 3.8, which moved the asyncio.run() method to stable API, you can start using it without any problem. The only issue with moving from a synchronous approach to an async one, is to change the way of thinking about the problems. You have to change the way you think about every little detail. Once you reach that point of thinking in terms of async functions, believe me, you will love it.

How does it work under the hood?

Let’s check the type of the async function. So, the async function is of type coroutine. This GeeksForGeeks article does a very good job of explaining coroutines. To sum up what they wrote in the post, subroutines are the set of instructions that have one entry point and are executed serially. On the other hand, Coroutines can suspend or give away the control to other Coroutines, allowing multiple tasks to run at the same time. Python uses this concept to allow async behavior.

It is necessary to have a timeout for waiting for the task to get completed. We are not supposed to wait forever for it to complete. asyncio also provided the ability to add a timeout to the async function so that you can skip the execution before its completion. A practical application of this can be a case when you are calling a third party API in your application and the third party itself is down. In that case, you don’t want to wait for a long time. You can use the timeout method to solve your problem. See the code for example: The async function will raise TimeoutError if the coroutine doesn’t return before the given timeout is passed. Response after executing the above code is There are other awesome methods in the asyncio module. You can check them at python’s official website.

If you want to provide a better and faster experience to your users, you can start using the asyncio module in your application. This will definitely help you find cases in which you can reduce the execution time of your API or whatever else that you are doing. Just forcing yourself to write in this way for a few months can yield big returns in the future.

1. How does Django validate passwords?

4. How to use FactoryBoy to create model instances in Django for testing